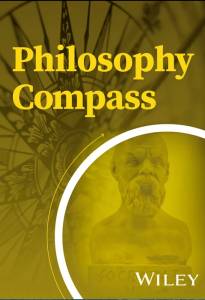 My article Philosophy of Games is out now in Philosophy Compass. (A pre-print draft is also available for free.) Philosophy Compass is a journal which focuses on producing surveys of particular sub-fields of philosophy, especially new and breaking ones, largely for use by newcomers. It is designed to orient. They are often used by academics to help develop syllabi for undergraduate classes in unfamiliar train.

In this Compass, I quickly cover basic foundational works on games (Huizinga, Caillois, Suits, the ludography vs. narratology debate), and then dive into particular issues on the art status of games, the nature of interactivity, the magic circle, debates about value, and ethical issues in the philosophy of sport (like doping) and video games (like the gamer’s dilemma). This article was intended to cover primarily work on games in analytic philosophy (analytic aesthetics, philosophy of sport, and analytic game ethics) with just the barest smattering of Game Studies material for minimal orientation. The article is not intended to summarize the field of Game Studies, nor does it intend to cover continental approaches to games. In fact, I would strongly urge specialists in those field to write their own equivalent summaries; they are badly needed.

Scholars from Game Studies will likely find the first half familiar. The second half, however, may prove useful, especially the section on philosophy of sports. Consider especially the discussions of internalist accounts of value in sport, the relationship between philosophy of law and the justification of sport, and the discussion of the origins of norms of sportsmanship.

Second, my essay The Aesthetics of Rock Climbing is online in The Philosopher’s Magazine. This is a popular article which adapts ideas from my forthcoming book. I say that rock climbing is a game, and one that many people play for aesthetic reasons. Many climbers climb because responding to the challenges of the rock evokes graceful, delightful movement from them. It is something like problem-solving dance:

“…Dancing, I think, is exactly the right place to start to understand the aesthetic dimension of rock climbing. So let’s start there: climbing is something like dance – not just in skill, but in aesthetic reward. You can hear the similarity when you listen to some climbers talk about their climbs. They talk about climbs with nice movement, with good flow, with interesting moves. They’ll talk about ugly climbs, beautiful climbs, elegant climbs, gross climbs. At first you might think they are just talking about the rock itself and how it looks. And sometimes they are; every climber loves a clean crack up a blank face, or bold jutting fin to climb. But if you interrogate a climber, and watch as they explain where the beauty in the climb is – with arms out, legs in the air, imitating the odd precise movements of the climb – you’ll figure out that what so many of them care most about is the quality of the movement – about how it feels to go through the rock, about the glorious sensations in the body, and the subtle attention of the mind.”