Stefano Gualeni has made a philosophical game that has received a great deal of interest. There is a recent article about it at Kotaku. 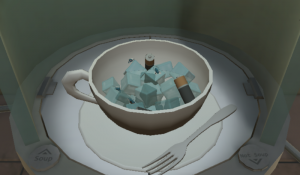 Stefano writes “Something Something Soup Something is my latest attempt at ‘playable philosophy’.  The game, if we agree to call it such, can be freely played on (or downloaded from) the official website: soup.gua-le-ni.com

It was developed at the Institute of Digital Games (University of Malta) with the support of Maltco Lotteries.

I and the rest of the developers prefer to think of it as an interactive thought experiment: a piece of technology that discloses situations and presents notions in ways that are interactive and negotiable (and maybe even playful).

Something Something Soup Something it is designed to reveal, through its gameplay, that even a familiar, ordinary concept like ‘soup’ is vague, shifting, and impossible to define exhaustively. It is also designed to stimulate reflection on the possibility to analytically define what a game is: does the presence of several ‘ludological ingredients’ warrant its definition as a video game? What if only a part of it could be formally recognized as a video game? Is it even wise or productive to strive for a complete theoretical understanding of concepts like ‘soup’ or ‘game’?”