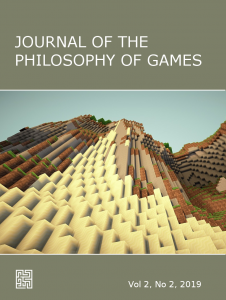 The first article for the second issue of Journal of the Philosophy of Games is available in the online first issue. It is written by Paul Martin and introduces the fascinating topic of carnal hermeneutics, or how the body makes non-predicative distinctions during play. The article has actually been online for a while, but it has been postponed for publication to this year, since we want a section on meaning in computer games for this issue.

From the paper abstract:

“Carnal hermeneutics claims that the body makes sense of the world by making distinctions and evaluating those distinctions in a non-predicative mode. This article makes the case that ludohermeneutics can be enriched by attending to the way in which the body makes sense of digital games and advances carnal hermeneutics as a way of theorising this process. The article introduces carnal hermeneutics, argues for its relevance to ludo-hermeneutics, and outlines three examples of how carnal hermeneutics can be used to theorise sense-making in digital games. The first example demonstrates the capacity for touch-screen games to put us in a new relationship with the image. The second example shows how generic control schemas can take on new meanings in different games. The third example shows how marketing of game controllers draws on conventional attitudes to touch to make digital game touch meaningful.“