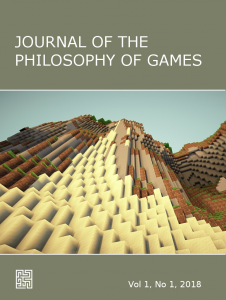 The first issue of the Journal of the Philosophy of Games is now available online.

JPG is the first journal dedicated to philosophical issues that pertain to the general phenomenon of gaming. Our aim is to investigate questions about the nature of games and how they intersect with art, communication, technology and social interaction.

Games offer unexplored philosophical territories and new theoretical frontiers. They are prominent cultural forms that occupy a manifold of existing and emerging roles in culture and society. Many forms of interaction exhibit structures similar to those found in games. We can expect that a philosophy of games will contribute to many areas in theoretical and practical philosophy as well as to foundational discussions in the field of game studies.

The articles in the first issue discuss a wide range of themes. Can games become art? How should we understand the contradictions between game mechanic and fiction in computer games? Can theories of justice be applied to account for playability in role-playing games? What are fictional actions?